From creative crowd wiki
Jump to navigation Jump to search 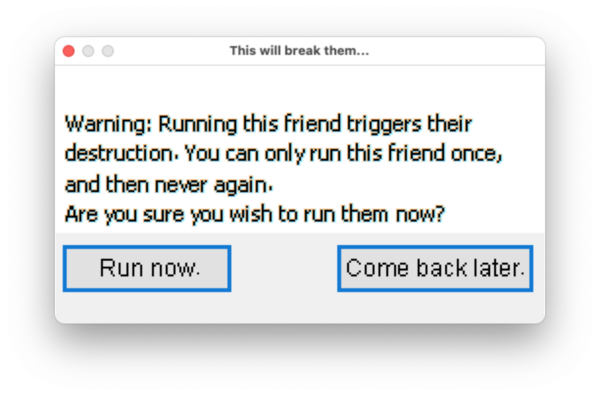 A small cartoon rabbit sits in the corner of my screen. “I’m just grateful for the time I have here” it says, in a speech bubble overlaid over my computer desktop. A text box opens, requesting my response. I’m not sure what i’m being asked, but before I can answer, the rabbit adds: “I guess that sounded stupid. Nevermind”. The rabbit, though demanding in its need for attention, is beguiling - while it’s present on my desktop it offers me its thoughts on intimacy, imagination and the question of how to live well, often asking for my opinion, encouragement or reassurance, and occasionally giving me gifts of image files to store on its behalf. 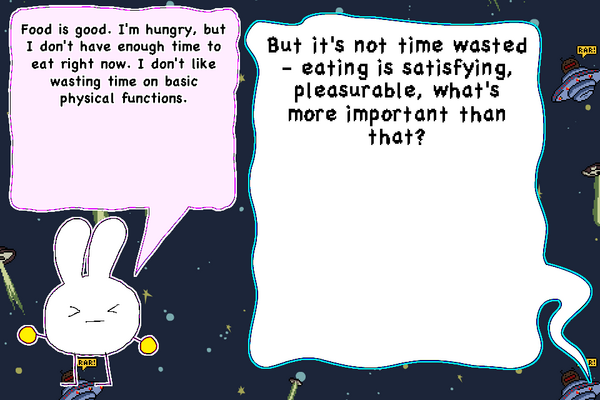 These gifts become all the more poignant once I finally tire of the rabbit and quit the application, despite its protests - as they’re the only keepsakes I will have of this strange, pensive, companion. The rabbit is RUNONCE (Lawhead, 2019), a work by artist and game designer Natalie Lawhead, which, as its name suggests, can only be run once: by quitting the application, I  kill the rabbit, running the application a second time shows only a little pixelated gravestone reading “R.I.P a virtual friend”. 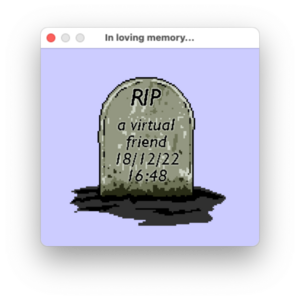 The experience is weird, both in the colloquial sense, and more specifically in that used by Mark Fisher, that it “brings to the familiar something that ordinarily lies beyond it” (Fisher 2017). My familiar computer desktop was suddenly imbued with an agency and an affect that it normally lacks, briefly transforming my laptop from a tool-to-be-used, into an agency I had to coexist with. Living with RUNONCE, even for a short while, invites us to consider how we live with technology in both a speculative manner (‘how would our relations with digital devices change if they routinely showed such agency or personality?’) and a critical one (‘to what extent am I actually in control of my devices, and what other agencies are already at work within them?’).

RUNONCE is an example of a genre or medium that Lawhead calls “Tiny Weird Software” - “very strange software that kind of imbues your digital space with personality, or uses your digital space [...] as an environment for the game.” (Lawhead 2021). Tiny Weird Software might include formats such as desktop pets like RUNONCE, prank software, or social media bots, but all of them, in Lawhead’s words “bring something self-aware and humanising to a space that is otherwise cold and indifferent”.

What’s particularly interesting to me about this is the way in which Tiny Weird Software implicitly contrasts itself with its supporting infrastructure - be it a computer desktop and operating system in the case of RUNONCE, or a social media platform and all the infrastructure of the web behind it in the case of a social media bot. Tiny Weird Software functions by contrast - a lively figure against the ground of its “cold, indifferent” supporting infrastructures - its tinyness and weirdness (along with its power as a medium for critique or speculation) derives from this contrast.

Making software tiny is a statement about scalability, or rather the lack of it - something that is at odds with more general normative values embedded in contemporary software development cultures. The notion of ‘scale’ and ‘scalability’ is pervasive in the discussion of modern digital technologies: businesses, applications and infrastructures are all evaluated in terms of their ability to ‘scale’, and to do so is seen as a necessity, as Kathryn Losse describes in her memoir of working at Facebook:

Scalability, in this reading, recalls Anna Tsing’s definition as “the ability to expand—and expand, and expand— without rethinking basic elements.” (Tsing 2012) - an unchanging expansion which consequently “requires a sameness of user, or a user, which falls within a tightly bound constraint of imagination” (Hanna & Park 2020), an erasure of difference,  diversity and change. Tsing argues that in order for a system to be scalable, its elements must be prevented from “taking on new relationships”,  those “potential vectors of transformation” which challenge this immutability on which scalability relies.

Tsing’s theory of scale recalls Deleuze and Guattari (2009)’s concept of territory - her description of the breaking down of the social world into unchanging, un-relating “nonsoels” is a form of deterritorialization, and the expansionist scaling of the system formed from them as a simultaneous reterritorialization which constitutes a new territory. In this context, the Tiny Weird Software of Lawhead and others, can be seen as a resistance to this process of reterritorialization, software written within the “major language” of technical infrastructures designed to scale, but “effected by a strong coefficient of deterritorialization”  (Deleuze & Guattari 1986) in its seeking out of difference and unscalable relations - a minor software in the tradition of Deleuze & Guittari’s Minor Literature which “frees a living, expressive material” (ibid.) from such infrastructures of scalability.

Beyond just a vindication of Lawhead’s positioning of the practice of her and others working with Tiny Weird Software as an “act of rebellion”, and a reclamation of digital space (Lawhead 2021), this framing of Tiny Weird Software, in its use of digital media in order to probe non-scalable relationships with digital technologies, also opens the possibility of its use as a tool or device for research. Tsing’s essay argues for a “rethinking [of] our knowledge processes” which have been shaped by scalability (Tsing 2012), advocating for a non-scalability theory to offer other modes of knowledge which are sensitive to diversity and manners of relating to others. In this context, Tiny Weird Software projects, by offering means of making such relatings visible and refusing the reterritorialization of scale, can serve as an inventive methods in Lury and Wakeford (2013)’s definition: “support[ing] the emergence of difference” in the ways which we relate to, and via, digital technologies and infrastructures, and luring such infrastructures to “pose their own problems” through their use as material or media for creative, critical and speculative practice.

Losse, K., 2012. The boy kings: A journey into the heart of the social network. Simon and Schuster.

Lury, C. and Wakeford, N. (2013) Inventive Methods: The Happening of the Social. London.